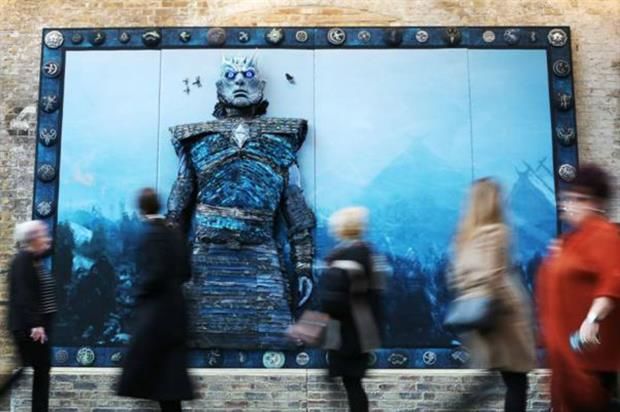 Laura McQuarrie — April 5, 2016 — Pop Culture
References: hbo & eventmagazine
Share on Facebook Share on Twitter Share on LinkedIn Share on Pinterest
In celebration of the release of Game of Thrones' fifth season on Blu-ray and DVD and the coming of the sixth season, HBO set up a unique Game of Thrones ad in the Crossing Gallery at Central Saint Martins.

Rather than installing a paper poster with the cast's familiar faces, HBO crafted an intricate piece of artwork with help from 50 members of the UK's textile community. After more than 30,000 hours, the Embroiderer’s Guild, Royal School of Needlework and others created a piece that brings the massacre of Hardhome to life. As well as employing digital printing, the textile mural also uses surface stitchery, machine embroidery, as well as other intricate tasks like beading and appliqué.

In anticipation of the new season, Game of Thrones has been teased with a number of inventive stunts, including chocolate dragon Easter eggs and elaborate snow art.
3.9
Score
Popularity
Activity
Freshness
View Innovation Webinars