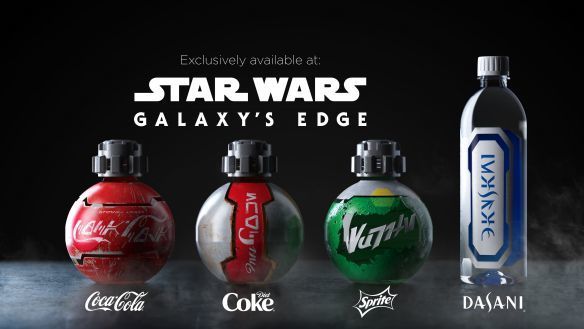 Coca-Cola's New Galactic Bottles are a Nod to Star Wars

According to Scott Trowbridge, Portfolio Creative Executive and Studio Leader for Walt Disney Imagineering, the park's galactic bottles are part of a special collaboration between Coca-Cola and Disney. Apparently, Coca-Cola "immediately saw the opportunity to give our guests the refreshing drinks they love in a way that maintained the authenticity of the story," and the result was a series of special-edition, orb-shaped cola bottles. The galactic bottles are also sealed with a futuristic lid and the labels are printed in Aurebesh, which is the film's fictional language. The bottles are only available at the new Galaxy's Edge Park, making them the ultimate collector's item for Disney visitors.