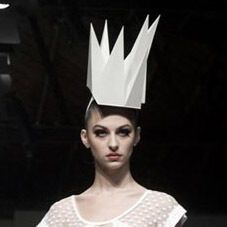 karl burkart — November 1, 2008 — Fashion
References: trendhunter
Share on Facebook Share on Twitter Share on LinkedIn Share on Pinterest
I was one of the lucky few who made it through the gates of Box Eight during LA fashion week to see the much anticipated spring line by Brian Lichtenberg.  Lichtenberg is something of a wonderkid...barely of drinking age he has become a fulcrum in the wildly-spinning Los Angeles club kid fashion scene.

Most famous for his cool 80’s inspired metallic and holographic tights that adorned those so adored thighs of MIA, Lichtenberg has made a name for himself in LA and just a few weeks ago spurned LA fashion week promoters in order to do his own show across town at the uber-cool venue Box Eight.

Lichtenberg has moved on from the metallic stuff and into crazy skin-tighht lace constructions (how he sews that is anyone’s guess).  The show was great, but what caught my eye more than anything I must confess was the hats.

A veritable menagerie of colorful and eye-popping head gear bedecked both the models and the hippest of audience members (I had a baseball cap - complete faux pas)—turbans, steampunk top hats, crazy Dr. Suess-inspired head dresses, vintage bonnets, Boy George mini-hats.  You name it.  It seems the sky is really the limit when you are 20 and fabulous.

But amidst the sea of whacky hatted heads, a few gems really shone out and presaged I trend I believe we will see emerging soon—the futuristic head construction.  Inspired more by Origami and Japanese fashion from the 18th century, these magnificent pieces were designed by visionary 22-year-old Franc Fernandez who designed the pieces specifically for Lichtenberg.

Some like dadaist chess board pieces others like folding paper games, these hats really push the envelope about what a “hat” actually is.  Surely the ghost of M. Bresson must be pleased.  The piece de resistance was a geodesic dome like structure encasing a most severe model’s striking face.

Shout out to Rob Ganger of EcoNouveau who managed to get me in!
4
Score
Popularity
Activity
Freshness
Get Better and Faster