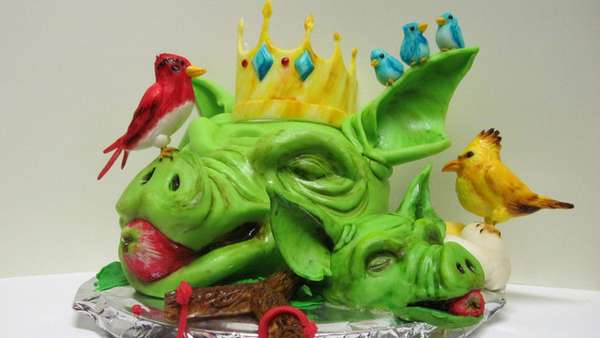 Matt Ho — July 9, 2011 — Lifestyle
References: threadcakes & kotaku
If you've ever wondered what happens to those pigs after you win an Angry Birds level, the Furious Fowl Cake by Threadcakes will give you a pretty good, but disturbing idea.

The team of Kelli Watkins and Jamie Masterson created the Furious Fowl Cake without the intention of reflecting Angry Birds. After taking a second look, however, the two converted this scrumptious dessert into the popular iPhone game. This treat isn't cartoonish, either; Watkins and Masterson molded a very realistic version of the characters out of fondant and spray-painted the cake with an airbrush and edible paint. The result? A hyperreal version of the red, yellow and blue bird standing on top of their defeated enemy swine. Additional details that reflect the game include the slingshot.
2.9
Score
Popularity
Activity
Freshness