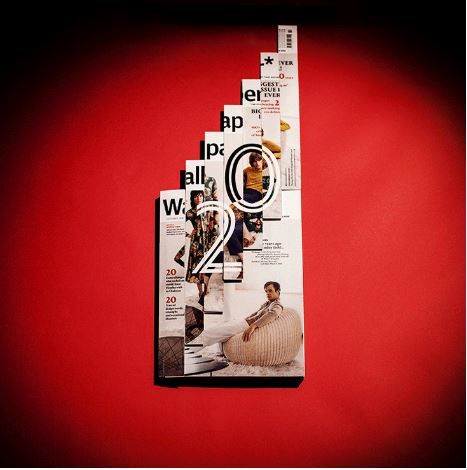 Joey Haar — September 26, 2016 — Marketing
References: wallpaper & dezeen
Share on Facebook Share on Twitter Share on LinkedIn Share on Pinterest
The cover is the prime location for a magazine to show off its best designs, but Thomas Heatherwick's 'Friction Cover' turns the form of the cover itself into the most impressive design feature. The cover, made for Wallpaper Magazine's 20th anniversary issue, comes with hinges joined such that the entire cover can swivel upwards to reveal a hidden number "20" in black and white.

Heatherwick designed the Friction Cover accidentally, as the hinging mechanism was originally meant for a table that he had been working on. However, when approached by the creative director of Wallpaper magazine to design their 20th anniversary cover, Heatherwick decided to transfer the idea to the printed page.

The Wallpaper issue comes pre-assembled in stores with plastic pins, but consumers also have the option to purchase a regular cover and assemble the Friction Cover mechanism themselves.
1.1
Score
Popularity
Activity
Freshness
Attend Future Festival