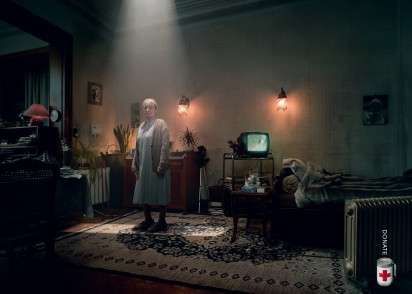 The French Red Cross Campaign Revolves Around a Generous Light

Meghan Young — January 21, 2013 — Marketing
References: ibelieveinadv
Share on Facebook Share on Twitter Share on LinkedIn Share on Pinterest
At first the French Red Cross campaign appears to center around a classic spotlight. Then it turns into a heavenly light. The latter may seem rather appropriate considering the angel status may donators take on, but in reality it goes even deeper than that. As the rectangular glow on the ground suggests, the light mimics the shape of a coin slot such as the one used for donation cans. Thus, the room becomes the inside of one.

Conceived and executed by 6AM, France, an ad agency based in France, the French Red Cross campaign is beautifully poetic. It was art directed by Eric Landowski and Julien Korach with creative direction by Laurent Bodson. Although the scenes still seem rather sad, that might pertain to an empty donation can that needs to be filled.
0.9
Score
Popularity
Activity
Freshness
View Innovation Webinars