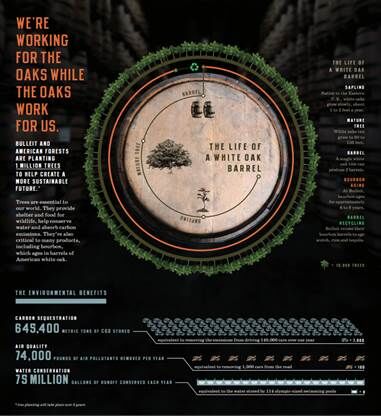 Grace Mahas — October 16, 2020 — Social Good
References: multivu
Share on Facebook Share on Twitter Share on LinkedIn Share on Pinterest
In an effort to combat the very devasting effects of climate change, Bulleit Frontier Whiskey joined forces with American Forest to plant over one million tress over the next five years. The green-forward initiative was made in accordance with the whisky's brands continued efforts for a sustainable future and is part of the Bulleit Frontier Fund. The efforts will contribute towards carbon sequestration, air purification, water conservation, and providing vital wildlife habitat.

Sophie Kelly, Sr. Vice President of Whiskey at Diageo North America, commented on the iniatiive, stating: “At Bulleit, we believe now more than ever that businesses have a responsibility to our environment, our communities and our planet. We’re so excited about our partnership with American Forests, because it allows us to further our commitment to sustainability and help in the fight against climate change by planting these trees, which will provide a variety of environmental benefits for years to come including carbon sequestration, air purification, water conservation, and providing vital wildlife habitat.”