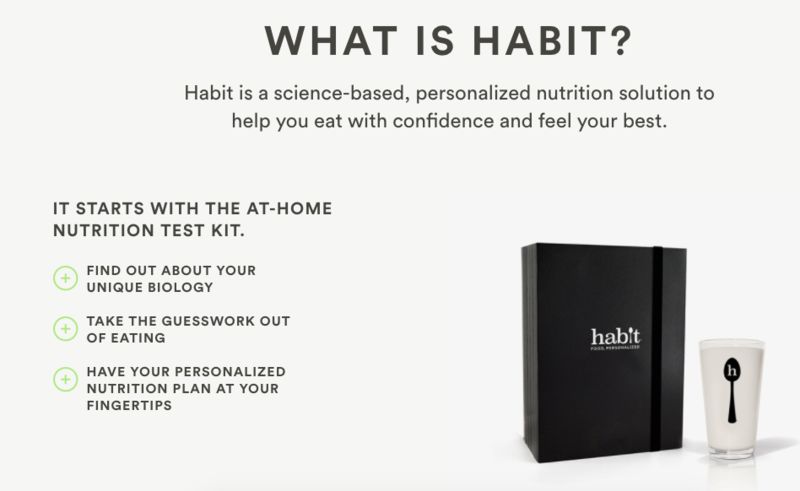 Take a few samples at home, send them off and Habit will do the rest. Using sophisticated biological, anthropometric and genetic testing, it analyzes over 60 biomarkers to discover how your individual body works and what foods it needs—what it calls systems biology. Habit uses the results to design a nutrition action blueprint specifically for you based on your body’s needs.

Neil Grimmer, personalized nutrition pioneer and former co-founder of Plum Organics, launched Habit after his own journey to get back to his optimal health. Neil found himself 25 pounds heavier than he wanted to be—25 pounds that were threatening his longevity. After DNA and blood tests, he discovered the best way back to a healthier, energized version of himself was by eating the types of foods that his individual body was asking for. And with that, Habit was born.

Quick-fix diet programs don’t work; that’s why Habit brings together a brilliant team of scientists, registered dieticians, nutritionists, technologists, chefs, food scientists, health coaches, designers and business leaders. Once Habit’s Nutrition Intelligence Engine identifies the foods and nutrients that are best for you, these experts come together to put the plan into action.

Habit’s dieticians analyze the data and create a custom meal plan and ongoing coaching. Then its chefs turn the dietary recommendations into fresh, wholesome meals, personally tailored and delivered to your doorstep. Extra online support created by Habit’s technologists ensure that everything you could ever want to know about your personalized plan is at your fingerprints.

And because results always speak louder than words, Habit is partnering with Stanford on a study to demonstrate the efficacy of these interventions, including a randomized, double-blind study slated for later this year.

Habit’s recommendations are not static. Their platform is built to evolve with validated science. As new nutrition data becomes available, it updates algorithms and communicate the latest information to the Habit community.

Habit announced a partnership with FitBit at CES this year, saying: “We will utilize data gathered from Fitbit devices to create food recommendations and nutritional plans through the personalized nutrition service. The service utilizes metrics like weight, body fat percentage and calories burned to create specially tailored meal plans.”

Grimmer is not new to applying innovation to food. His work with Plum Organics disrupted the baby food industry by replacing flavorless goop in jars with great-tasting, organic meals in pouches. Under the Campbell’s banner, Plum has continued to see $100M sales. No doubt that Habit will see the same strong results. And in a country where more than a third of the population is obese and another third is overweight, Habit has the potential to drastically improve life for everyone.
5
Score
Popularity
Activity
Freshness
Jeremy Gutsche Keynote Speaker