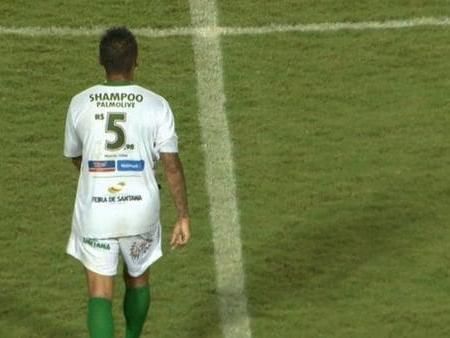 Joey Haar — April 10, 2017 — Lifestyle
References: independent & thedailymeal
Share on Facebook Share on Twitter Share on LinkedIn Share on Pinterest
Fluminense de Feira, a team in the fourth-tier Brasileiro Serie D league, is understandably short of cash. Even in a country as mad about soccer as Brazil, lower league teams can often struggle to drum up enough of a fan base and attendance to drive their revenue. As such, teams need to get creative, and Fluminense de Feira has done just that with its price point jerseys.

Jersey sponsorships aren't anything new in soccer — every team puts ads on their jerseys, including Champions League squads. Fluminense de Feira has taken those sponsorships a step further, though, by loaning out players' numbers for sponsorship as well. The team is sponsored by a local supermarket, and that market advertises its prices through the players' numbers. For example, Fernando Sobral, the teams star striker, now wears a jersey that reads 'Pizza' across his shoulders and '10.98' where the typical number would be.
2.8
Score
Popularity
Activity
Freshness
Attend Future Festival