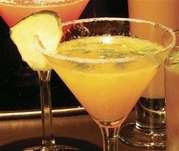 Alex Covert — August 29, 2007 — Lifestyle
References: news.yahoo
Share on Facebook Share on Twitter Share on LinkedIn Share on Pinterest
Potemkin, a London vodka bar, is now serving vodka-based drinks named after Russian businesses listed on the London Stock Exchange. The companies (and drinks) include Tatneft, Rostelekom, Evraz, MMC Norilsk Nickel, and Surgutneftegas. Buyers beware, however, as the alcohol content in each of these drinks is tied to their performance. If the business is doing well, the alcohol amount goes up and vice versa.

Here's a little tidbit of Russian history: Potemkin villages were fake settlements set up by Russian minister, Grigori Aleksandrovich Potemkin, to impress Empress Catherine II when she visited Crimea in 1787. The "hollow facades of villages" along the Dnieper River enhanced "his standing in the empress's eyes," according to Wikipedia.