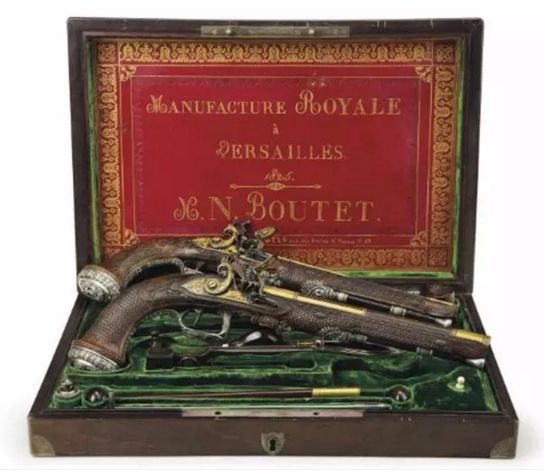 These Flintlock Pistols Are Being Auctioned Off At Christie's New York

Rahul Kalvapalle — April 7, 2016 — Business
References: christies & gizmag
Share on Facebook Share on Twitter Share on LinkedIn Share on Pinterest
The Christie's auction house in New York is preparing to auction a pair of 19th century flintlock pistols that make for an exceptional example of craftsmanship and history. Originally presented by General Marie Paul Joseph Gilbert Motier, the Marquis de Lafayette, to Simon Bolivar, these pistols will go on auction on April 13.

These flintlock pistols feature octagonal barrels that are crafted with multi-groove rifling for improved accuracy. The woodwork features generous use of Grenoble walnut. Seeing as how these pistols were chosen for formal presentation, it's perhaps unsurprising that there is a lot of intricacy and craftsmanship here in the form of elements such as engraved foliage panels for example.

Ultimately, these flintlock pistols feature a world of history, and so are expected to command a very hefty price among prospective buyers with an appreciation for military history.