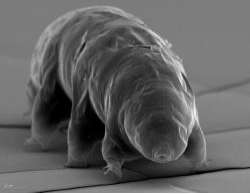 These harmless microscopic invertebrates (0.1 - 1.5 mm) live in oceans and ponds, but often in water droplets on mosses and lichens. The little alien lookalikes are fascinating because they are incredibly resilient. They can survive for years in their dried state and yet they can be instantly brought back to life with just a drop of water. They can withstand extreme temperatures, acid and solvent attack, high pressure, and low vacuums.

The ESA’s 10-day experiment examined how well the tardigrades reacted to not just airless conditions but also UV radiation and cosmic rays. Two-thirds of the tardigrades protected against the intense UV light from the sun not only survived, but went on to produce eggs after they were rehydrated. The only thing that could really kill them was the UV light - more than 1000x stronger than on Earth. Very few unprotected tardigrades survived.

The grey picture of a dead tardigrade was taken with an electron microscope. The video shows a lively water bear in action.
2.3
Score
Popularity
Activity
Freshness
View Innovation Webinars