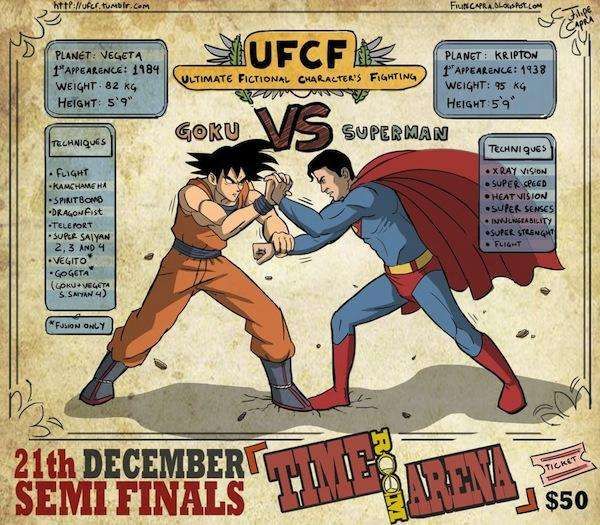 Filipe Capra Pits Pop Culture's Greatest Characters Against Each Other

Jason Soy — May 28, 2012 — Pop Culture
References: filipecapra.blogspot.br & blog.thaeger
Share on Facebook Share on Twitter Share on LinkedIn Share on Pinterest
Women may not know this, but guys often debate about which fictional character would win in a fight, much like these Filipe Capra posters. Could Superman, endowed with powers that essentially make him a god, defeat Goku, a super Saiyen who’s beaten the odds time and time again? Such match-ups would be a dream come true for dudes to witness, and Capras’ royal rumble posters involving pop culture’s best bring men that much closer to actualizing that dream.

These epic battle promos are a part of an on-going series Filipe Capra has dubbed ‘Ultimate Fictional Character Fighting.’ Other stellar bouts include Mega Man vs. Astro Boy, Sonic the Hedgehog vs. the Road Runner, Yoda vs. Libra Dohko and Legolas from Lord of the Rings vs. Hawkeye from The Avengers.