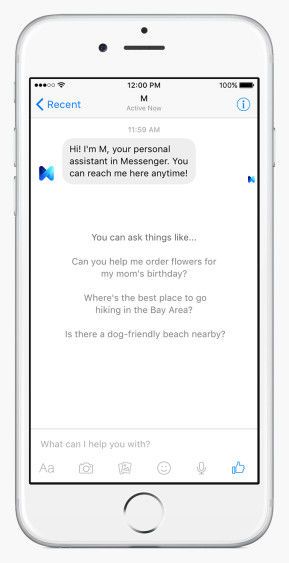 Siri is the virtual assistant that lives in the iPhone's operating system. iPhone users can ask her to give them directions or send their mother a birthday gift. The Facebook Siri, called 'M,' will function in a similar way, but is actually quite different. From the Facebook Messenger app, users will be able to choose an option to chat with M. They can then request things from it (M is genderless) as if it were their own personal assistant. The difference between M and Siri is that whereas Siri is totally automated, fueled by the power of artificial intelligence, M runs on a mixture of AI and live support. So it could be a human or a computer answering your texts and making your dinner reservations.

The impressive system will be just the latest move in Facebook's ever-expanding campaign to provide technology for every aspect of everyday life.
1.2
Score
Popularity
Activity
Freshness
View Innovation Webinars