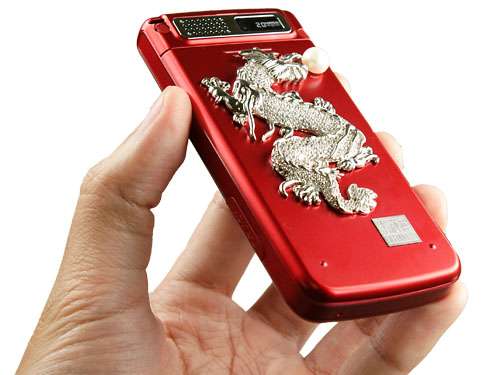 It was designed by best-selling author Lillian Too who writes about Feng Shui and is also an avid follower of the ancient Chinese practice.

The phone comes in red with a paste-on silver dragon in high relief with a red faux-diamond on the dragon's eye. It's crusted in 288 cubic zirconia gems for an intense sparkle. There is also a pearl near the dragon's mouth and below that is Too's seal with her name inscribed in Chinese and English.

"Other design elements of the Lillian Too Lucky Dragon phone include a lanyard with a number 8' trinket (signifying wealth in Chinese)," CNet says. "The phone comes only in red, giving it a 'fire element to ensure financial success.' There aren't any geomancy tools available in the software, but you can choose among 12 wallpapers that correspond with animals of the Chinese Zodiac."

The Lucky Dragon phone comes with standard features such as screen, keypad and shortcut buttons, a camera and 6MB of built-in user memory.