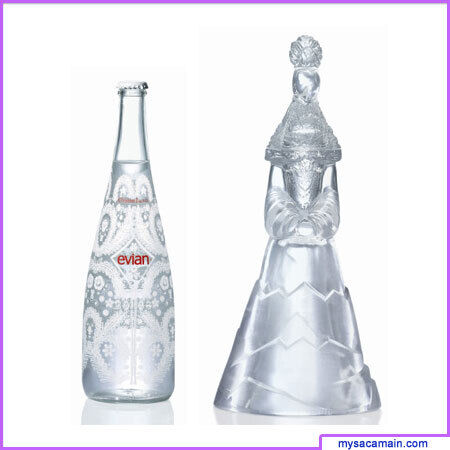 The "prÃªt-Ã -porter" bottle features a clear, classicly shaped European water bottle decorated with a detailed, highly sophisticated white pattern. The "haute-couture" version, on the other hand, doesn't feature any printed art. Instead, it feature intricacies in the actual bottle design, the final product resembling an elaborate ice sculpture. Only 99 couture bottles were made and will be auctioned off for charity.

The prÃªt-Ã -porter model can be purchased at high end grocery stores, fancy restaurants, and at upscale hotels beginning November. The 750 ml bottles are sure to become collector's items. They're expected to sell for between $5.99 and $9.99, depending on the venue.

The first bottles of Lacroix Evian were spotted at the Christian Lacroix's Spring 2008 show, where they were placed on the seats of VIP attendees. Fastened to each bottle with elegant red ribbons was a note from Lacroix saying, "It seems that Evian natural spring water has been there all my life; I remember the curly label of my childhood in the hotels by the lake where our family used to spend holidays. It is therefore as an amused and rather proud old friend that I designed these 2007-2008 bottles."

The images are from the Spring/Summer 2008 collection that debuted in Paris earlier this month.
4.7
Score
Popularity
Activity
Freshness
Get Trend Hunter Dashboard