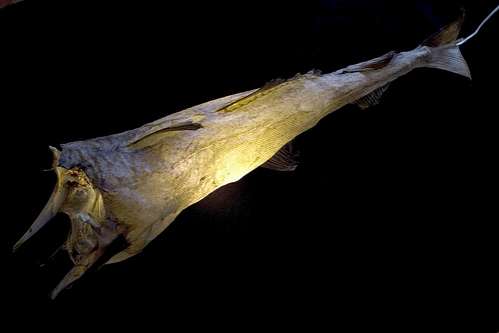 Hjortur — September 9, 2008 — Art & Design
References: uggi-lights & vefjakrot.is
Share on Facebook Share on Twitter Share on LinkedIn Share on Pinterest
Uggi Lights, also known as dried cod lamps, are an interesting example of age old tradition re-made. In Iceland people used to hang fish whole to dry and then eat (and actually, they still do). Two Icelandic designers, Fanney Antonsdottir and Dogg Gudmundsdottir, came up with a new innovative way of using the largest dried cod, 70-100 cm in length. They have turned them into designer lamps.

The concept started as an installation in Copenhagen in 2001 under the name “The Bird That Flew Away and Left Time Behind”. The installation has been traveling around the world since then, being featured in the Guggenheim in Berlin, FNAC in Paris, The National Museum of Women in the Arts in Washington DC, The International Design Biennale in St.Etienne and the National Museum of Iceland in Reykjavik. The Uggi fish lamps are now on exhibition at the Keflavik Airport in Iceland.

If you would like a dried cod lap, you can buy one for 680 Euros.
1.9
Score
Popularity
Activity
Freshness
Get Better and Faster