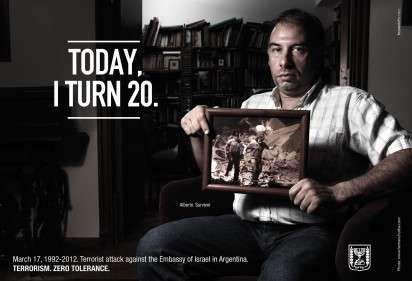 The Embassy of Israel in Argentina Campaign is Against Terrorism

Meghan Young — March 20, 2012 — Marketing
References: basevich.ar & ibelieveinadv
Share on Facebook Share on Twitter Share on LinkedIn Share on Pinterest
It is clear that the people featured in the Embassy of Israel in Argentina ad campaign are not even close to being 20 years old, even though each one claims just that. Instead, they are much older. The tag line, “Today, I turn 20,” refers to the anniversary of the terrorist attacks that they survived on March 17, 1992. Each person is holding a distraught portrait of themselves on that tragic day.

Conceived and executed by Basevich Crea, an ad agency based in Buenos Aires, Argentina, the Embassy of Israel in Argentina ad campaign is simple, serious and poignant. With creative direction by Javier Basevich, the campaign strongly shows that the embassy holds zero tolerance towards terrorism.