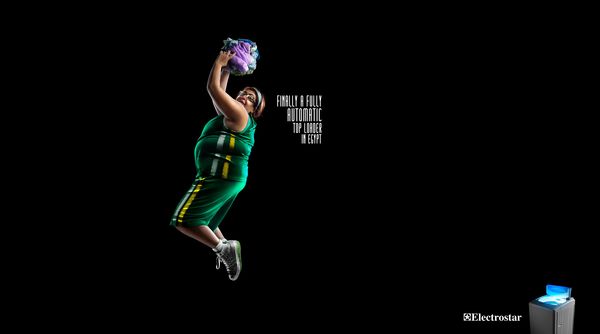 Meghan Young — March 24, 2014 — Marketing
References: welcometokairo.tumblr & adeevee
The Electrostar Washing Machine ad campaign reads excitedly, "Finally a fully automatic top loader in Egypt." To promote the introduction of such a household appliance, it likens the machine to a basketball net and the women who use it as star players from such NBA teams as the Boston Celtics, Orlando Magics, Chicago Bulls and Los Angeles Lakers.

Conceived and executed by Kairo, an ad agency based in Cairo, Egypt, the Electrostar Washing Machine ad campaign playfully illustrates how much fun users will have when doing the laundry with this new model. Art and creative directed by Montasser Khalil with copywriting by Hesham Ellabban and photography by Ayman Abbas, the images are given a bit of a dramatic touch in order to make the actions really epic.
3.9
Score
Popularity
Activity
Freshness