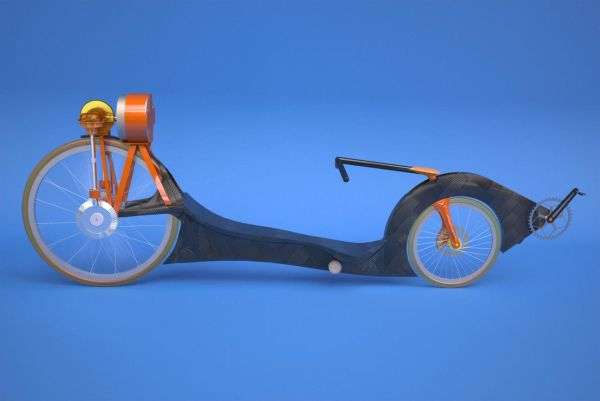 The Electric Recumbent Bike is a Victorian Two-Wheeler

Michael Hines — February 15, 2012 — Autos
References: jamesdysonaward.org & ecofriend
The Electric Recumbent Bike is a conceptual bicycle designed to store kinetic energy in its flywheel. The bike was designed for the James Dyson Awards and combines steampunk styling with modern tech.

The Electric Recumbent Bike features an electric motor that can be recharged from an AC outlet or through regenerative braking. The bike is capable of running for 40 minutes at a speed of 33 mph when fully charged. The bike has a maximum range of 20 miles and a maximum speed of 49 miles.

The bike’s early 20th century design should appeal to those clamoring for an ultra-retro ride that is also eco-friendly. Unfortunately for urban cyclists, this bike is no lightweight cruiser. All told this bike weighs 77 pounds, a load too big to bring onto a city bus or subway. Still, the Electric Recumbent Bike would be a great middle ground for those who want the power of an electric scooter, but don’t want to deal with a high price tag.
5.9
Score
Popularity
Activity
Freshness

Handlebar-Free Trikes
The Sleek Trimtab 3x3 is No Traditional Tricycle