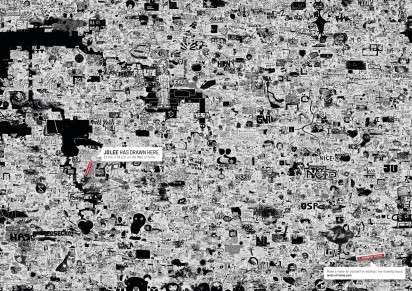 The Edding Wall of Fame Campaign Features a Mess of Illustrations

Meghan Young — December 12, 2011 — Marketing
References: kempertrautmann & ibelieveinadv
Share on Facebook Share on Twitter Share on LinkedIn Share on Pinterest
The Edding Wall of Fame ad campaign is all about self-expression, even in the chaotic mess that the world can be in. Filled with over 7 billion people, the world is full of individuals that may feel their creative side is stifled. Thanks to the Edding 3000 marker, however, as well as a little bit of faith and determination, people can not only express themselves, but be recognized for that expression as well.

Put together by kempertrautmann, an ad agency based in Hamburg, Germany, the Edding Wall of Fame ad campaign centers around a particularly messy map of the world. It is only made messy, however, because of the gazillion numbers of people participating the Wall of Fame campaign. These print ads actually feature illustrations for 40,000 users. Who knows what the number is now.
2
Score
Popularity
Activity
Freshness
Get Better and Faster