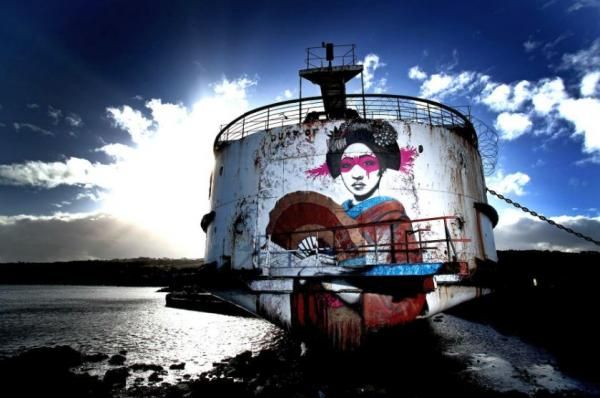 The DuDug Project Transformed Steam Ship Into a Masterpiece

Kristina Marković — February 10, 2014 — Art & Design
References: dudug & environmentalgraffiti
The DuDug Project turned a rusting old abandoned steam ship into a giant street art masterpiece. The hulking steamer is located off the banks of the River Dee in north Wales. To passerby, the ship was an eyesore and another maritime relic. The DuDug Project is a group of street artists who produce colorful political graffiti art. The artists often depict animals as people and use political-satire in their art works.

The DuDug Project essentially produced a massive street art gallery on the ship. The colorful open-air gallery transformed the rusting ship into a beautiful sight. One of the graffiti art pieces features a giant Geisha with purple paint splattered over her eyes. The ship wreck also features amazing political pieces like monkeys' dressed in suits, a pig with a police cap on with bulging eyes and the words "greed, power, power, corruption" on its side. The Banksy-reminiscent graffiti art by the DuDug Project is an amazingly vibrant outdoor art display.
3.7
Score
Popularity
Activity
Freshness