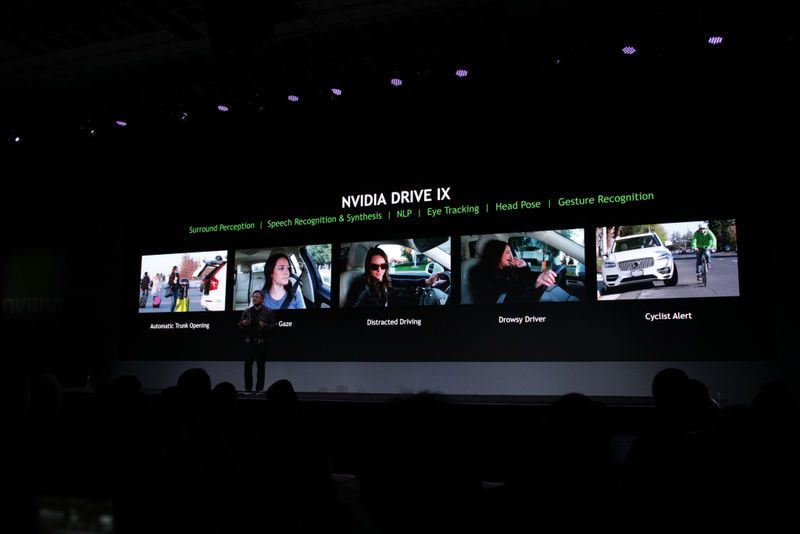 Justin Lam — January 10, 2018 — Autos
References: theverge & techcrunch
Share on Facebook Share on Twitter Share on LinkedIn Share on Pinterest
Nvidia is already considered a giant in the world of computers, but with the Drive IX, the prolific PC hardware manufacturer is getting involved in self-driving vehicles. At CES 2018, Nvidia announced DRIVE AI, an AI chip produced by the company that's made specifically for autonomous vehicles. Not only was the reveal of the technology impressive, but to cap it off, Nvidia announced collaborations with Uber and VW in implementing the new AI.

Much of the Drive IX announcement dealt with the ability of the technology to run unique and innovative AR displays in vehicles. The Drive AR platform will allow developers to build experiences into the vehicle that can display road conditions, points of interest and other attractions. The AI platform will be able to use the AR displays to interact with both the driver and passengers, and Nvidia will likely build its own proprietary voice assistant into the software.

Volkswagen followed up this reveal by announcing the use of Nvidia's platform in it's future models. Meanwhile, Uber has already been using the tech in its autonomous test cars for quite some time now. Uber plans to use the platform in its eventual fleet of self-driving Volvos. Neither Uber nor Nvidia have commented on the exact amount of software Uber is using, but we do know that the rideshare company is using the Nvidia GPU for some AI work.
3
Score
Popularity
Activity
Freshness
Get the 2023 Trend Report FREE