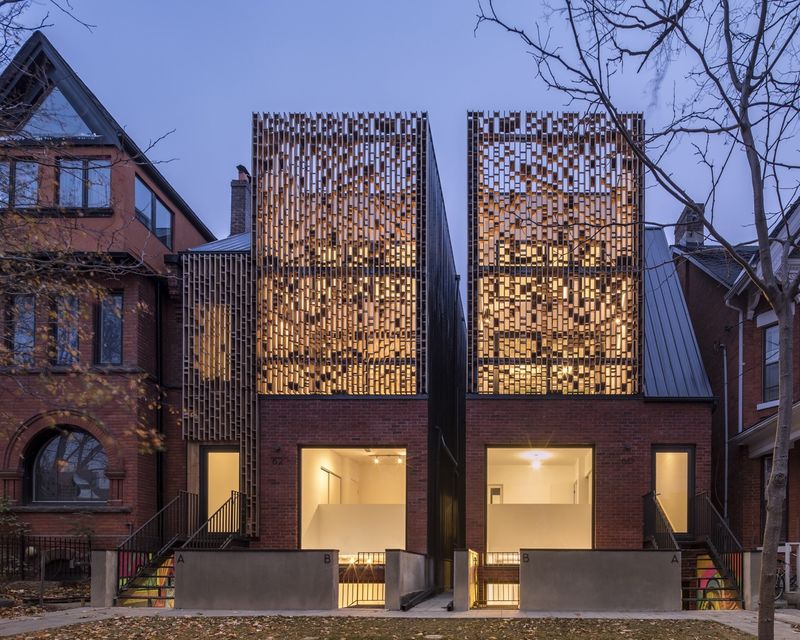 Joey Haar — April 26, 2017 — Art & Design
References: batay-csorba & archdaily
Share on Facebook Share on Twitter Share on LinkedIn Share on Pinterest
Double Duplex, a new infill project in Toronto's Parkdale neighborhood, stands out because of its twin facade. The slats of vertical timber that make up the brise soleil are interspersed with irregular horizontal bars, and, thanks to the play of light and shadow across these perpendicular surfaces, the facades give off the impression of a shimmering surface.

Though the Double Duplex project is immediately distinct from the traditional Victorian and Bay and Gable mansions that surround it, it nonetheless pays homage to that history. The lower portions of the two duplexes are covered in red brick, which is the same material to clad the one hundred-plus year old homes in Parkdale.

An added benefit of the timber brise soleil covering Double Duplex is the effect of light on the interior: its shape gives off a pleasant, dappled effect on the natural light that shines through it.
3.9
Score
Popularity
Activity
Freshness
Jeremy Gutsche Keynote Speaker