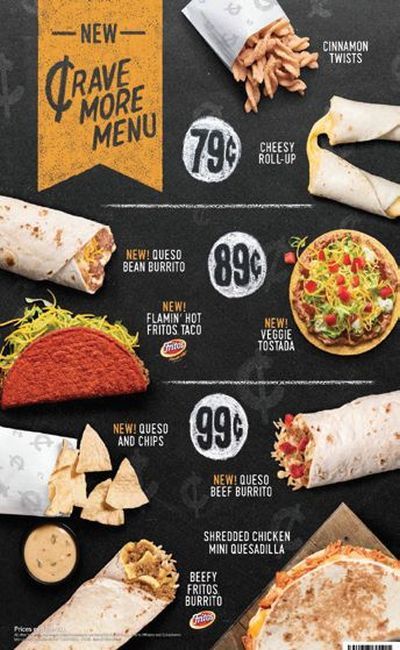 Katherine Pendrill — August 23, 2016 — Lifestyle
References: brandeating
Share on Facebook Share on Twitter Share on LinkedIn Share on Pinterest
Taco Bell recently began testing its new 'Crave More Menu,' which features a selection of items that cost less than a dollar. While the idea of a value menu is nothing new, Taco Bell is taking the concept to the extreme by offering its food at extremely discounted prices.

The new Crave More Menu is a selection of new and existing Taco Bell items that each cost 99 cents or less before tax. The menu has three tiers, with some items costing as little as 79 cents and others hovering closer to one dollar. Some of these items are new additions to the Taco Bell menu, such as the Queso Bean Burrito, the Veggie Tostada and the Flamin' Hot Fritos Taco.

While the new menu is currently only in the testing phase in Omaha, Nebraska, it does demonstrate that the chain is willing to experiment with ultra-discounted menu options.
4.8
Score
Popularity
Activity
Freshness
Get Better and Faster