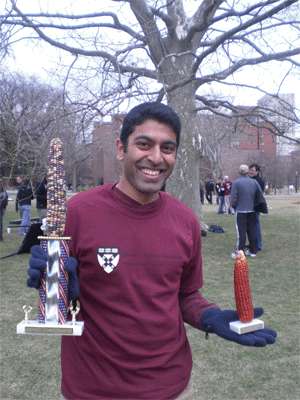 Ben Preiss — October 15, 2007 — World
References:
Notice: Undefined index: host in /home/jeremy/public_html/thcp/core/core.functions.php(637) : eval()'d code on line 3
& desmoinesregister
Share on Facebook Share on Twitter Share on LinkedIn Share on Pinterest
The Cornhole craze started in the mid-west and has nothing to do with violating farm animals. In fact, it is a game that, depending on where it's played, is also called bags or baggo and involves tossing a beanbag (or cornbag) into a hole in board. The phenomenon has grown so big, that the American Cornhole Association formed.

"But for two months this summer, 26-year-old Mike Medici of Ankeny had a serious case of Bags fever. The John Deere employee said he first played the addictive throw-the-beanbag-in-the-hole game a year ago during pre-football tailgating in Iowa City. Before long, he and girlfriend Amber Berglund decided they needed their own set - well, two sets, one painted with Cyclone colors, the other Hawkeye. They even made their own beanbags, Medici admitted. To Medici, there's not much of a mystery as to why Bags - also known as Baggo and Cornhole, depending on which part of the country you're in - has become a craze that has spread from backyards to bars to even a burgeoning tournament circuit. "It's just a nice little game to play," he said. "You don't have to overexert yourself. Anyone can do it. We play with my parents. My girlfriend can do it, and it's competitive between the two of us."

Implications - Today's consumer is constantly on the lookout for new ways to enjoy themselves, as the digital world has shortened their attention span and caused for constant entertainment.
1.5
Score
Popularity
Activity
Freshness
Access Advisory Services