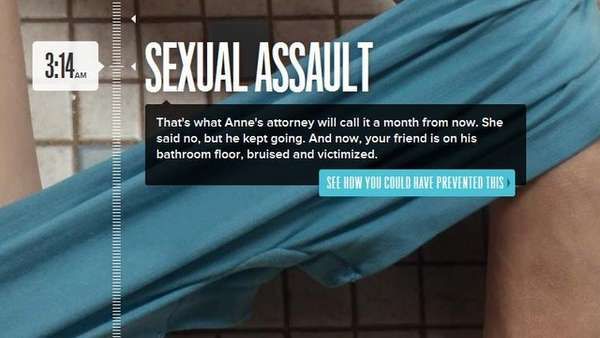 Katherinev123 — December 7, 2011 — Lifestyle
References: controltonight & jezebel
Share on Facebook Share on Twitter Share on LinkedIn Share on Pinterest
If your friend drinks too much and is sexually assaulted, is it your fault? The Control Tonight campaign by Pennsylvania Liquor Control Commission says it is. These ads are taking the blame away from people who drink too much and putting them on other people (friends) who should have prevented this excessive drinking in the first place.

As Jezebel points out, sexual assault does occur a lot when alcohol is involved, but ultimately, this kind of shockvertising "is not increasing awareness, it's just shifting blame away from the rapist and onto the victim and, oddly, the victim's friends."

Along with the ads centered on rape, the Control Tonight campaign features a few other ad "stories" -- for instance, your friend had alcohol poisoning and had to get her stomach pumped. On the campaign site, you have the option to click on a button that reveals how you could have prevented the unfortunate event from occurring or clicking to experience another unfortunate story.
3.8
Score
Popularity
Activity
Freshness
Attend Future Festival