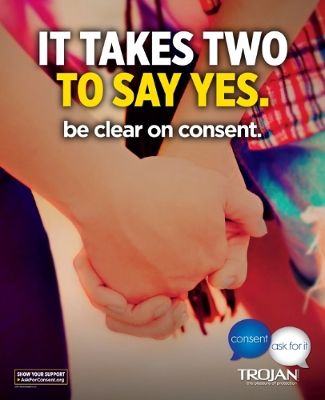 Trojan and Laci Green Went to UC Berkeley for 'Consent. Ask For It.'

Joey Haar — January 10, 2017 — Social Good
References: askforconsent.org & prnewswire
Share on Facebook Share on Twitter Share on LinkedIn Share on Pinterest
Trojan, the condom brand, and Laci Green, a popular YouTuber, recently teamed up for the 'Consent. Ask For It.' campaign. In an effort to support a culture of consent on campus, Green went to UC Berkeley, her alma mater, to promote the campaign and its message of fostering positive sexual experiences.

The 'Consent. Ask For It.' campaign centered around Green, whose YouTube channel often deals with peer sex education, giving advice and encouragement on how to make consent a regularly accepted part of college life. She provided advice on how to initiate the conversation, ways to discuss the importance of consent, and how students themselves can get involved.

Beyond Green's own appearance, the campaign also included posters with messages like "It Takes Two to Say Yes" and "Wherever You Go, Make Sure You're Both Along for the Ride."
3.2
Score
Popularity
Activity
Freshness
Attend Future Festival