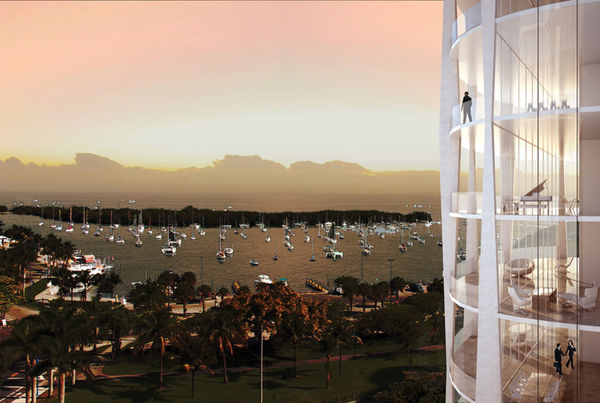 Tiffany — January 22, 2014 — Eco
References: miami.curbed
Share on Facebook Share on Twitter Share on LinkedIn Share on Pinterest
An architectural competition was held in Miami near the end of 2013 and was hosted by the developers of Terra Group and real estate developer Related Group, with the help of curator Terence Riley; the project was to win the architectural bid for the Coconut Grove Waterfront Development, as an addition to the expansive cityscape.

The winner was announced at the Design Miami Fair 2013 and architecture and design firm Office for Metropolitan Architecture (OMA) has been announced as the winning firm to construct a mid-rise residential space for the waterfront. Occupying over five acres of land, the Coconut Grove will incorporate up to six residential towers, where each building will be home to one or two units per floor. The buildings were designed with the Coconut Grove waterfront theme in mind, where the development plan is the inclusion of interconnected indoor and outdoor spaces allowing each apartment unit to enjoy 360 degree panoramic views of the cityscape.

“The homes are like stacked villas, very different from an apartment where you are always sandwiched between two walls and have only one direction to look at,” says the architects of the Coconut Grove on the visual layout of the residential structure.
5.6
Score
Popularity
Activity
Freshness
View Innovation Webinars