Life As It Should Be 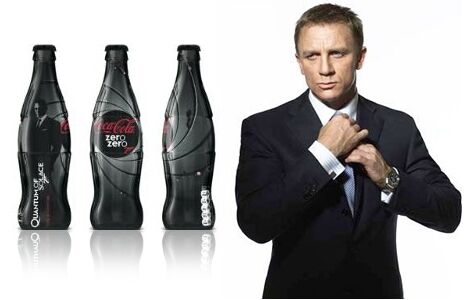 Ayman — September 5, 2008 — Pop Culture
References: foodbev
Share on Facebook Share on Twitter Share on LinkedIn Share on Pinterest
James Bond is changing his drink of choice from the famous vodka martini (shaken, not stirred) to Coca-Cola Zero. But don’t worry, the tech-savvy spy is not a recovering alcoholic now. Coca-Cola UK has struck a genius promotion deal with Sony Entertainment that links Coca-Cola Zero with ‘Quantum of Solace’, the much anticipated Bond movie.

I say genius because Coca-Cola zero will be launching a special limited edition package of coca-cola zero under the name ‘Coca-Cola Zero Zero 7’ as a cool reference to Bond’s 007 codename.

“The new, edgier Bond persona is the ultimate embodiment of the Coke Zero brand personality, and is expected to deepen the brand’s engagement with its core target audience of 20-something men,” said Bobby Brittain, Brand Director of Coca-Cola Great Britain.
5
Score
Popularity
Activity
Freshness
Get Better and Faster