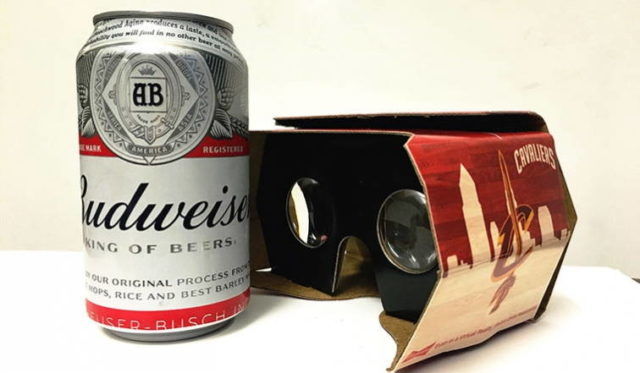 Katherine Pendrill — May 17, 2016 — Lifestyle
References: dodocasevr & ubergizmo
Share on Facebook Share on Twitter Share on LinkedIn Share on Pinterest
In an effort to bring a new level of engagement to the arena experience, DODOCase teamed up with Budweiser to create exclusive Cleveland Cavaliers VR headsets. Not only did the new headsets give fans a unique way to enjoy the game, but they also doubled as beer holders when not in use.

The Cleveland Cavaliers VR headsets were distributed to 750 lucky sports fans during a playoff game against the Atlanta Hawks. The headset itself was designed by DODOCase, which uses collapsible technology to create a lightweight and inexpensive VR viewer. The headsets worked in conjunction with an accompanying app that allowed fans to view the National Anthem performance, the Cavaliers' locker room, the practice facilities and the player introductions. When not in use, the headset also doubled as a beer holder for keeping cold cans of Budwiser in place.

The experience marks the first time the NBA has brought VR technology into the arena, thereby setting a new precedent for the future of the live game experience.
6.3
Score
Popularity
Activity
Freshness
Access Advisory Services