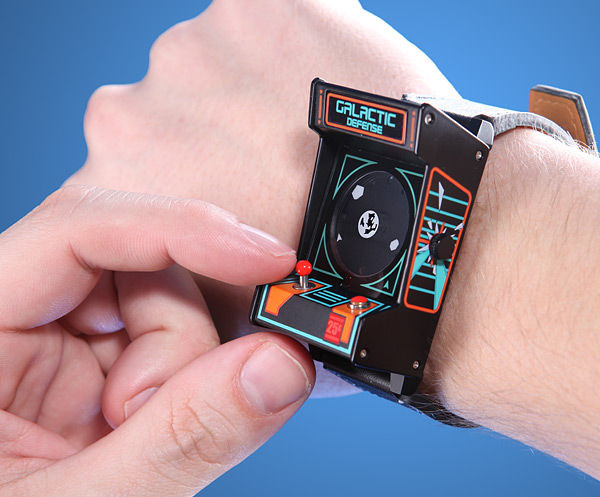 Michael Hines — February 19, 2014 — Tech
References: thinkgeek & technabob
Share on Facebook Share on Twitter Share on LinkedIn Share on Pinterest
Those who spent their formative years playing 'Galaga' and 'Asteroids' will be all about the Classic Arcade Wristwatch. ThinkGeek has managed to shrink an arcade cabinet down to wrist-size, and the result is a watch that tells time using a small spaceship and space rocks. Yes, that's an 'Asteroids' reference.

The Classic Arcade Wristwatch features a joystick and a button that are nonfunctional and functional, respectively. The joystick can be moved, but it controls none of the watch's functions. However, the red button is used to activate the backlight, which lights up the hour and minute indicators. The Classic Arcade Wristwatch can be yours for $59.99, although you'll have to wait a bit. The watch isn't being released until March 2014.
4.3
Score
Popularity
Activity
Freshness
Get Trend Hunter Dashboard