3 Signs It's Time to Change Jobs 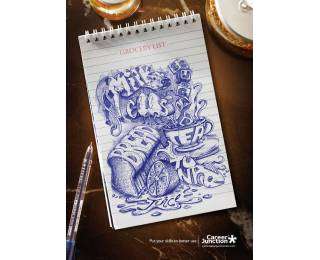 The three-part ad campaign inspires readers to change jobs by depicting different scenarios in which your talents might be wasted. In the first ad, a grocery list is illustrated with a ballpoint pen in stunning graphic design form.

In the second ad, a graph plots the path of the percentage of different types of clothes (sweatpants, bikinis) as weight loss is achieved. In the third, a simple agreement between gardener and homeowner is executed in lawyer-like fashion, complete with legalese. Beside each ad, the tagline reads "Put your skills to better use."

The Career Junction ad appeared in the Middle East and was devised by TBWA/RAAD.
2.9
Score
Popularity
Activity
Freshness
Get Better and Faster