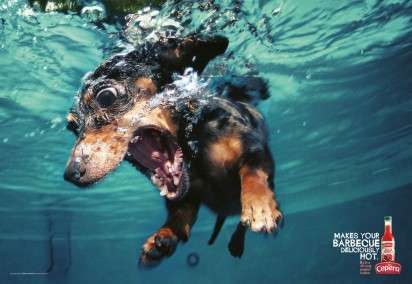 Meghan Young — June 6, 2012 — Lifestyle
References: yr & ibelieveinadv
Share on Facebook Share on Twitter Share on LinkedIn Share on Pinterest
The Cepera Extra Strong Pepper Sauce ad campaign shows that this barbecue topping is so hot that the dogs who manage to sneak a taste will be regretting their primitive decision almost instantly. Captured diving into a pool with mouths wide open, the furry creatures are hilariously, albeit in an exaggerated way, trying to wash the heat away.

Created by the Young & Rubicam ad agency based in Sao Paolo, Brazil, the Cepera Extra Strong Pepper Sauce ad campaign may not be comforting to humans, but those who like the extra kick will want to get in on the action. Art directed by Paulo Monteiro with creative direction by Rui Branquinho and Flavio Casarotti, the ads were photographed by Seth Casteel and Monique Barros.
6.7
Score
Popularity
Activity
Freshness
Jeremy Gutsche Keynote Speaker