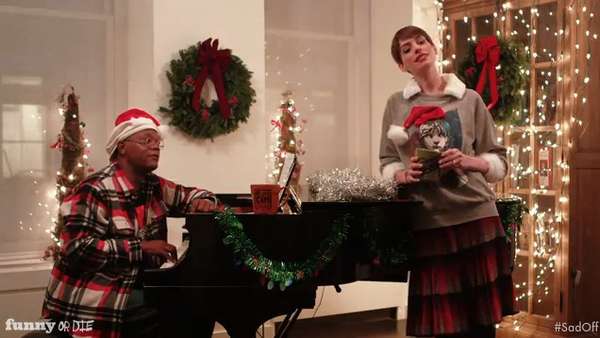 Anne Hathaway and Samuel L. Jackson Face Off In This Funny or Die Ske

Tana Makmanee — December 22, 2012 — Pop Culture
References: funnyordie & buzzfeed
Share on Facebook Share on Twitter Share on LinkedIn Share on Pinterest
With the onslaught of new movies releasing this holiday season, what better way to promote an upcoming film than with a hilarious sketch on Funny or Die? Cue Anne Hathaway wearing a Les Misérables sweater and a jolly Samuel L. Jackson wearing a Santa hat. With each actor having an upcoming release that is dark in nature, Hathaway with Les Misérables and Jackson with Django Unchained, they proceed to engage in a “sad off," a battle of whose movie is darker or sadder in nature!

Hathaway and Jackson battle it out in this hilarious satirical war of the words, with each actor stating a subplot of their movie in an attempt to prove its superiority over the other. With topics from each movie ranging from slavery to prostitution, the actors manage to keep the tone lighthearted and comical, adding even more hilarity to the video.

This Funny or Die sketch is a fantastic way to promote each of these two upcoming movies. By taking the video sketch approach, these actors are able to poke fun at themselves and their movies, which is a great way to engage viewers.
0.3
Score
Popularity
Activity
Freshness
Get the 2021 Trend Report FREE