Top 100 Shoes Trends in May 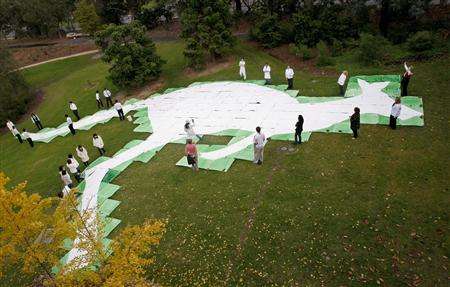 Bianca — May 20, 2008 — Eco
References: uk.reuters
An giant, white cardboard kangaroo is posing in Melbourne for a space-based photo shoot. Specifically, the 105 foot (32-metre) image of Australia's national animal is being used in a study on global warming to measure the Albedo effect, or what happens to the sunlight reflected off the Earth.

When the sun strikes the earth, rays are either reflected or absorbed, depending on the object they hit. Ice caps, for example, are major sun reflectors, which is why as they melt, the global climate is affected.

"If the sun rays get absorbed, then things heat up," says Professor Patricia Vickers-Rich of Melbourne's Monash University. "If they get reflected, things either stay the same or things cool off and you can have a glaciation."

"Ice is like our big kangaroo. The ice reflects the light, so it gets rid of a lot of the heat that comes in," she said.
1.4
Score
Popularity
Activity
Freshness