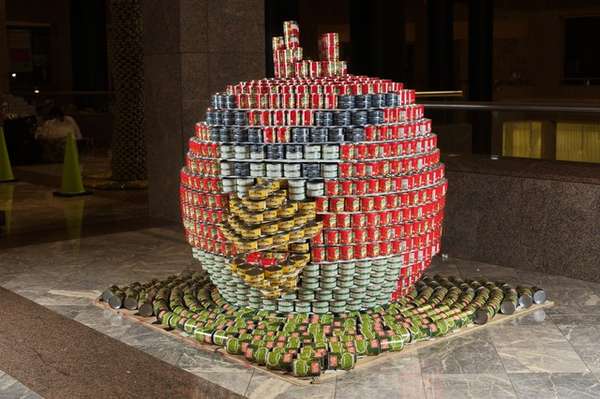 Angry Birds and More at Canstruction 2011 in NYC

Katherine Vong — November 14, 2011 — Art & Design
References: canstruction.org_ & gothamist
The Canstruction 2011 exhibit is on at the World Financial Center in New York City -- and it's free to visit! In its 19th year and part of a public food drive for City Harvest, this annual event is a competition that helps to raise canned food for charity. In 2010, the event raised over 2 million pounds of food, says the Canstruction website.

For Canstruction 2011, which is on until Nov. 21, 100,000 cans of food have been put to use by local architecture and design firms, who have created 26 spectacular designs. Among them are replicas of a sinking Titantic ship, Alexander McQueen's staggering Lady Gaga shoes, Angry Birds, the Brooklyn Bridge and more.

If you plan on visiting, bring a non-perishable food item, such as canned tuna or beans (this is a food drive, after all!). The cans used in the event, plus the donated cans, will all go toward local community food programs.
5.1
Score
Popularity
Activity
Freshness