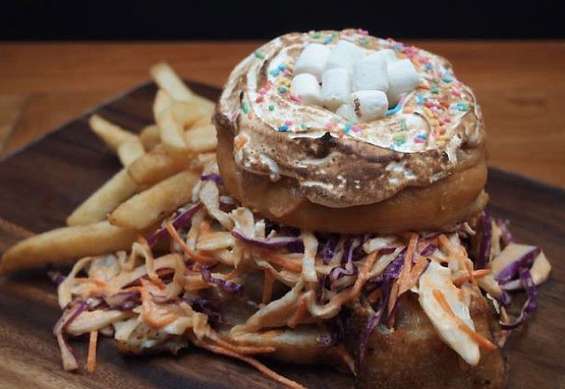 The Donut Zinger Contains Everything from Hot Sauce to Marshmallows

— June 16, 2013 — Lifestyle
References: facebook & lostateminor
Share on Facebook Share on Twitter Share on LinkedIn Share on Pinterest
The Donut Zinger is an excessively rich candy donut containing everything from chicken to peanut butter. Created by chef Bjorn Shen of Articoke Cafe & Bar, the Donut Zinger is the result of lists of ingredients sent in by customers, challenging Shen to somehow combine them to form a single creation.

This menu item is both savory and sweet, made up of a donut, chicken Sriracha hot sauce, marshmallows and peanut butter. In appearance, the Donut Zinger simply looks like a frosting and a sprinkle-covered mound of pastry on top of a bed of french fries. However, this creation is so much more than that. By combining all these unlikely ingredients, Chef Shen has created a challenging dish for even the hungriest cafe patron. People have begun daring one another to order the Donut Zinger and chow down, transforming it from a fun experiment into a cultural tradition.
0.8
Score
Popularity
Activity
Freshness
Access Advisory Services