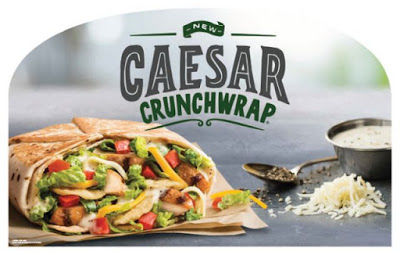 Katherine Pendrill — December 27, 2016 — Lifestyle
References: brandeating
Share on Facebook Share on Twitter Share on LinkedIn Share on Pinterest
With a growing number of consumers looking for fast food that is both healthy and portable enough to be enjoyed on the go, Taco Bell has debuted a clever new dish called the Caesar Crunchwrap, which manages to satisfy both needs at one.

The new Caesar Crunchwrap from Taco Bell is a hybrid dish that combines the chain's famous Crunchwrap Supreme with the same ingredients used to make a traditional Caesar salad. More specifically, the new dish features the same crunchy tostada shell used for the Crunchwrap Supreme, filled with Romaine lettuce, grilled chicken, tomatoes, a three-cheese blend, Caesar dressing and a new ingredient called parmesan crisps. The entire wrap is then grilled for a warm dish that can be enjoyed on the go.

Currently being tested at one Taco Bell location in London, Ohio, the new dish demonstrates the chain's willingness to experiment with healthier menu items.
2.7
Score
Popularity
Activity
Freshness
Get Better and Faster