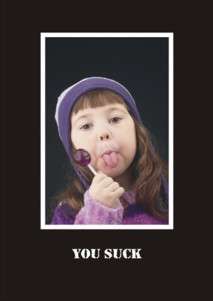 markfromsydney — September 6, 2007 — Naughty
References: brutallyhonest.au
Share on Facebook Share on Twitter Share on LinkedIn Share on Pinterest
Sick of cards that promote the notion of unwavering and everlasting love? For that next special occasion, snag a Brutally Honest Card. For the past 200 years, card companies have convinced us that we need, no, HAVE to express our most intimate feelings of love and affection through a seemingly infinite variety of dazzling and garish cards. But what about those not-so-happy feelings? How do you tell your partner, perhaps ex-partner, when you're annoyed, frustrated, angry or feeling betrayed?

Brutally Honest Cards addresses the issue of : addressing the issue! Honest and open communication is vital in dealing with the myriad of challenges that couples face within the course of any relationship. Yet while there are literally thousands, possibly millions, of cards that convey a profound message of love, none (until now) convey a message of discontent. Indeed it seems incongruous to think that people often give a great deal of thought to express their love in a written form, but yet are quick to express their frustration verbally, frequently spiraling into a hurtful argument with unwanted consequences. Or possibly worse still, as many people dislike even the thought of confrontation, to say nothing at all means the issues never get addressed and the situation remains unchanged.

Brutally Honest Cards' message seems to be simple: it's about the message. The noticeably distinctive cards are black in color, and carry a simple but effective image coupled with an intentionally bold headline. Although there is a veil of humor, the intent is clear. The cards seem not to be consumed with convoluted decorations nor elaborate fonts, but rather capturing the reader's attention and drawing them into the all-important message inside. It is here that the writer has the freedom to say whatever concerns or upsets them, unencumbered by a misguided verse or outmoded script. A blank canvass if you will to paint a picture of frustration or anger, conveying clear emotions that will not be misconstrued through a verbal clash.

Brutally Honest Cards intends to take on the giants of Hallmark and American Greetings, and establish a truly honest alternative that gives people the opportunity to express their less kind emotions; emotions that are often kept bottled-up inside and without resolution. So, if you want to tell your partner how angry you are or perhaps you're just trying to find a way to broach a very difficult or sensitive subject, then Brutally Honest Cards seems to have the solution for you.