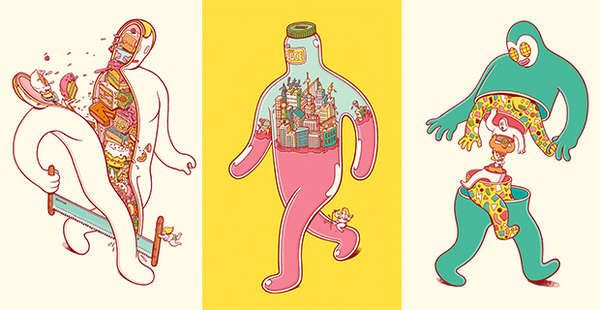 These Designs from Brosmind are Comically Disgusting

— July 8, 2013 — Art & Design
References: behance.net & lifelounge.au
Share on Facebook Share on Twitter Share on LinkedIn Share on Pinterest
Barcelona-based design studio Brosmind has created a shocking collection of illustrations featuring dissected monsters. These cartoonish creations each expose their insides to the viewer. However, instead of guts and gore, their insides can be anything from a cityscape to a whole other family of monsters.

The brothers behind Brosmind, Juan and Alejandro Mingarro, were inspired by Russian babushka dolls in creating this series. For this reason, the characters featured throughout the series never seem to end. Their interiors spill out of them and within these innards are more objects, and so on and so forth.

One monster is shown with his upper half detached from his lower half. From out of his lower half climbs another, similarly shaped monster, and from within this monster climbs another one. This creates an uncanny feeling in the viewer, since these monsters are humanoid in shape, making their figures recognizable, but still different. For this reason, Brosmind has created a memorable series that is sure to cause chuckles throughout Europe.
3.7
Score
Popularity
Activity
Freshness
Access Advisory Services