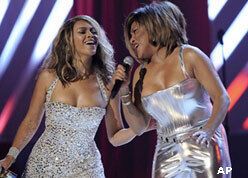 Even next to 26 year old Beyonce, Tina Turner looked absolutely bootylicious for her 67 years!

"This was the rock veteran's first stage appearance in several years. Turner, dressed in a skin-tight silver pant-suit, sang three songs, including her hits 'What's Love Got To Do With It' and 'Better Be Good To Me', as well as a duet of 'Proud Mary' with Beyonce," NME reported.