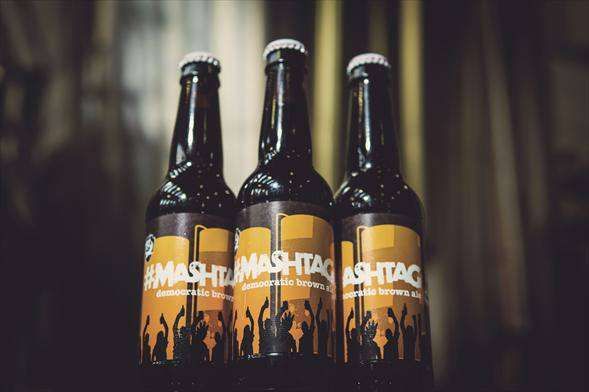 — June 30, 2013 — Lifestyle
References: brewdog & laughingsquid
Share on Facebook Share on Twitter Share on LinkedIn Share on Pinterest
BrewDog brewery, a unique company that is constantly creating strange and wonderful new ales, has just released their #Mashtag brew. This particular beer was created by votes from Facebook and Twitter users as to which ingredients were to be included in the beer. The resulting brew contains New Zealand hops, Hazelnuts, and Oak chips. Its 7.5% alcohol content makes it a bit stronger than some other ales out there, which was also, and unsurprisingly, voted on by social media users.

“We handed the keys to the brewery over to our fans,” said spokeswoman Sarah Warman. This genius marketing move has generated a ton of interest in the #Mashtag brew, since those who voted on its ingredients clamor to taste their own creation.

BrewDog describes this beer as "democratic," and by allowing its fans to create a beer of their own, BrewDog has truly created a democratic beer.
2.3
Score
Popularity
Activity
Freshness
Jeremy Gutsche Keynote Speaker