Top 100 Branding Trends in August
Next
Set of
Related
Ideas 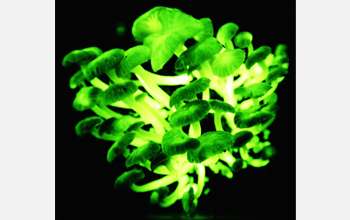 On August 15, 2008 the National Science Foundation wrote an article, A Thousand Points of Light: Bioluminescent Fungi , in which new photos, taken by a team of mycologists, of bioluminescent mushrooms are shown.

As you can see, the difference between photos taken during the day and night are drastic. During the day, the mushrooms look bland, whereas at night, they become a fantastic green neon light. The first set shown is Mycena lucentipes and the second Mycena luxaeterna.