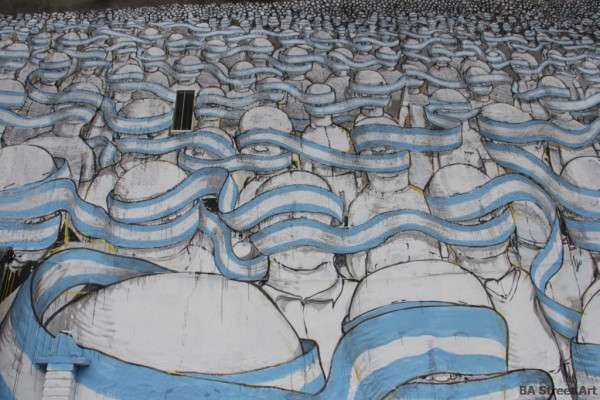 Ana Lopez — December 5, 2011 — Pop Culture
References: blublu.org
Share on Facebook Share on Twitter Share on LinkedIn Share on Pinterest
Street art distinguishes itself for calling audiences' attention towards social, political or economical issues, and Blu's Buenos Aires graffiti is no exception. The Italian artist created a graffiti mural in the streets of the Argentinian capital that is impressive because of its size and political message.

The wall art consists of a large crowd blindfolded by the country's flag. However, what's most striking about the whole concept is the dark figure looming at the back also wearing the flag on its shoulders. This figure suggests the dominant control of corrupted political power over citizens, that at times fails to recognize bad governments.

Blu's Buenos Aires graffiti is direct and strong, and questions the presidential faces that take advantage of their authority to find personal benefit and wealth.