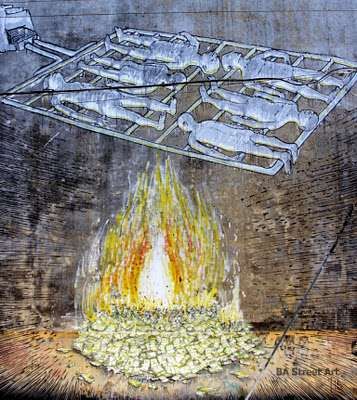 Ana Lopez — December 16, 2011 — Art & Design
References: blublu.org & buenosairesstreetart
Share on Facebook Share on Twitter Share on LinkedIn Share on Pinterest
Once again the street art artist Blu decided to take over the city of Buenos Aires, Argentina to question the political and economical actions of citizens and governments. Last week, Trend Hunter published another example of graffiti by Blu where a large crowd was blindfolded by the country’s flag while an obscure figure resembling a president stands at the back.

This time, the Italian genius based its graffiti on one of Argentina's favorite traditions -- barbecues -- to send out a controversial message. Consisting of a pile of the country's currency burning in flames and an a grill on top roasting six figures, this mural questions the careless use of money and whom this action is affecting or benefiting.

This critique by Blu makes civilians reflect on their leaders and how they manage their country and resources.