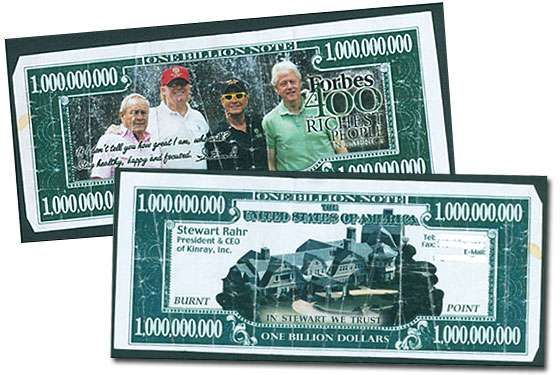 Billionaire Stewart Rahr – who goes by “Stewie Rah Rah”, ranks 397 on the Forbes 400 list of the wealthiest Americans, and whose deep tan evokes nicknames such as the “drugstore cowboy” (he is a pharmaceutical distributor and lender to pharmacy franchises) – gives out cards with his image on fake billion-dollar bills. So you know just how much money he has.

The images on the cards are not just of Rah Rah, however. Some show him golfing with Donald Trump and Bill Clinton. So you know just who he’s hanging out with, too.

Not only that, the backs of the cards show a picture of his $45 million Hamptons home, so you know just where he’s living, as well.

As if all that isn’t conspicuous enough already, some of Rah Rah’s cards also bear the slogan, “If I don’t tell you how great I am, who will?”