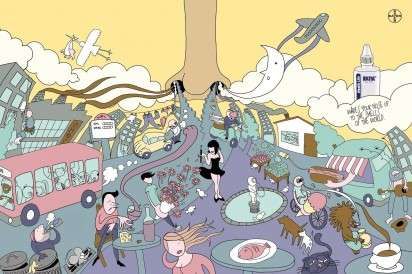 The Bayer Nazol Campaign is Filled With Groovy Illustrations

Meghan Young — December 6, 2011 — Marketing
References: bbdo & ibelieveinadv
Share on Facebook Share on Twitter Share on LinkedIn Share on Pinterest
For many, the winter season should actually be called the snuffly season, but as the Bayer Nazol campaign illustrates, that might not have to be the case for much longer. With the help of this particular nasal spray, people suffering from seasonal colds will be able to bypass the plugged nose stage.

Conceived by BBDO, an ad agency based in Moscow, Russia, the Bayer Nazol campaign is a series of illustrations that beautifully show how this product, "Wakes your nose up to the smells of the world," as its tag line states. From the calm countryside to the bustling city streets, the Bayer Nazol campaign captures a colorful world that really depicts how wonderfully smelly everything really is.
1
Score
Popularity
Activity
Freshness
Access Advisory Services