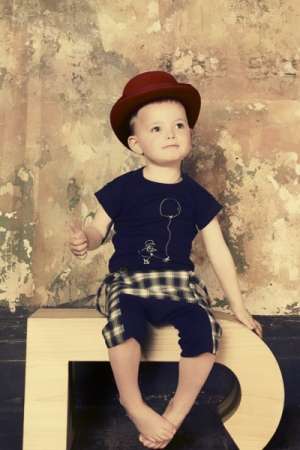 'Jessie and James' Creates Designer Clothing for Little Ones

Ben Dutton — February 14, 2012 — Life-Stages
References: jessieandjames & blogs.loughboroughecho.net
Share on Facebook Share on Twitter Share on LinkedIn Share on Pinterest
Fashion label 'Jessie and James' is reflective of how designer baby duds are taking the stage. David and Victoria Beckham’s baby daughter Harper Seven hit the headlines this February for making her debut at New York Fashion Week on her daddy’s arm -- perhaps it won’t be long until she launches her own label like her mommy. After all, with Stella McCartney in on the act, baby fashion labels are proving to be big business.

One kids’ label that’s causing quite a stir in the U.K. right now comes from a creative duo who met whilst working together at the iconic British fashion house Vivienne Westwood. Former Vivienne Westwood pattern cutter Jessie Richard and fashion designer James New, created the Jessie and Jame’ children’s fashion line after the birth of their son Billy (how cute is this story?)

The pair designed the first Jessie and James collection at their family home in London’s East Dulwich after initially creating just a few pieces for Billy. The first highly designed range, entitled ‘Under Construction,’ showcases the influence the edgy and iconic British designer has had on the the line, making it a must for fashion-conscious parents.

As if the range wasn’t hip enough already, the photography of the first collection was shot in the same room used for George VI’s therapy in The King’s Speech.
5.4
Score
Popularity
Activity
Freshness
Get Trend Hunter Dashboard

18 Kids' Fashions
From Rainbow Boots to Couture Styles for Children