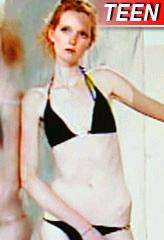 Is Alice Burdeu Too Skinny to Compete?

Specifically, Alice Burdeu is receiving a lot of media attention down under thanks to her emaciated appearance. At 18 years old and 6'1â€, the contestant on Australia's Next Top Model weighs only 127 lbs.

Critics are concerned that her participation on the show might send a bad image to impressionable young girls. Many are surprised that the Foxtel network even allowed her to participate in the contest.

Many international runways have been making a conscious effort to ban the waif-thin look. Designers worldwide have tried to steer away from the anorexic looking models of the past, encouraging models to have a healthier higher body mass index.

Next week champion swimmer Ian Thorpe will guest star on the show and won't be quick to hide his opinion. Insiders say he pulled Burdeau aside to advise her on the importance of maintaining a healthy physique.

The show's hostess, Jodhi Meares, says the contestant's weight is being monitored. She confirmed that Burdeu has seen a dietician who assured the aspiring model does not have an eating disorder.

â€œAlice should be allowed to stay in the competition on the proviso that she put on some weight,â€ said a spokeswoman for Australia's Next Top Model. She adds that Burdeu has committed to becoming healthier and has since gained weight.

Fans down under aren't impressed. â€œShe looks like she's been in a concentration camp, and yet she's being presented as a role model to teenage girls,â€ a mom of two teenage girls said. â€œIt's so irresponsible of the network, and I can't believe they're getting away with it.â€

Aussie Bloggers and online forums are showing equal interest in the debate. â€œI almost died when she had her swim suit on, her bones were sticking out,â€ one wrote.